Submissions to the Industry Track closed on February 20th, and we received a lot more papers than we anticipated. After several days of soliciting last minute reviewers and making reviewing assignments, the papers are now in the capable hands of the reviewers and we finally had some time to take a breather and do some initial analyses of our submissions.

In total, we received 91 submissions of which 6 were rejected without review due to non-conformance with the submission requirements. We analyzed the remaining 85 papers based on author affiliations and geography.

The goal of the Industry Track is to provide an outlet for authors whose work advance the understanding of, and demonstrate the effective handling of, practical issues related to the deployment of language processing technologies in real-world systems. As one would expect, such problems manifest themselves more readily in industry than in academia, and Figure 1 reflects that the majority of papers have authors who work in industrial labs. The encouraging statistic demonstrated by the graph, however, is that nearly 1/3 of the papers are the results of collaborations between those in industry and academia.

As far as geographic distribution of authors goes, this being a NAACL conference, not surprisingly, we received the majority of submissions from North American authors. However, over 1/3 of the papers came from other continents, with 22% from Europe, 14% from Asia, and 1 paper from Africa. Figure 2 shows this distribution. 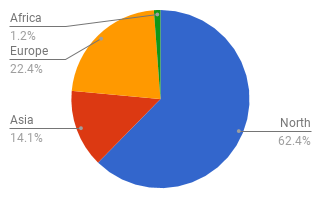 We hope this quick summary of the submissions we received was of interest. The next post will be the list of accepted papers, coming in a few weeks time.

View all posts by NAACL HLT